The city of Malmö was founded at the end of the 13th century, being mentioned in church records from 1270 as Malmøi and Malmøghe, while the Icelandic people called the city Malmhaugar. All these names are derived from the words 'malm' (gravel or sand) and 'höghe' (ridge or hill). In 1437, Malmö was awarded its city arms by King Erik av Pommern. The arms showed a griffin with a red neck that is crowned with a gold crown. It is now the third largest city in Sweden, after Stockholm and Gothenburg, and is the capital of Skåne County.

Malmö belonged to Denmark until 1658 when the region became Swedish. Sweden was at war with Poland when Denmark declared war against them. The Swedish King, Karl X Gustav, answered this declaration by marching from Poland through Jylland to attack Copenhagen. The winter of 1657-1658 was very cold and unusually the water over the Belts had frozen. The Swedes marched over the ice and took the Danish army by surprise. The Danes were forced to surrender and in February 1658, the Peace of Roskilde was signed. The treaty included the rights of the Skåningarna (Scanians) to self-administration and legislation. However, this privilege was abolished by Sweden in 1720 and the parliamentary function was transferred to Stockholm. It was not until 1999 that Skåne got back the privilege to a parliament and self-administration. 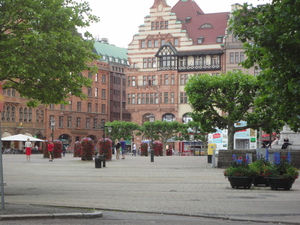 During the 18th century the city suffered from several epidemics and sieges and the population dropped. However, in 1775 the harbour was rebuilt by Frans Suell Jr. This allowed Malmö to flourish. In 1840 Kockums Industries/shipyard was founded and it eventually became one of the largest shipyards in the world.

Many changes have taken place in the city during the past 100 years. Malmö grew and became an important industrial town in the early 1900's but in the 1970's Sweden experienced a recession that hit industry very hard, particularly manufacturing and shipbuilding. Kockums shipyard, so long a symbol of Malmö and its greatest employer, closed in 1986. However, from 1994 and under the leadership of the new mayor Ilmar Reepalu, Malmö started to re-conceptualize itself as a centre of culture and knowledge and concentrated on service industries.

Today Malmö has nearly 300,000 inhabitants representing 171 nations, which makes it a truly cosmopolitan city. New buildings such as the Turning Torso, the Western Harbour, Malmö Arena and of course the Øresund Bridge have transformed its skyline.

However, Malmö is still a small, friendly city with a good choice of cultural attractions as well as many quality restaurants, bistros and cafés. And the shopping isn’t bad either, especially if you’re looking for Swedish design-ware and hip, new Swedish fashion labels.

Over the last few years the City of Malmö has received many international awards for its focus on sustainable city development and pilot projects such as Augustenborg and the Western Harbour. Malmö was also appointed as the first Fair-trade City of Sweden. 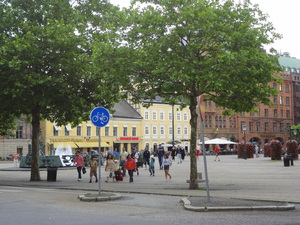 Stortorget is Malmö's oldest square, constructed by mayor Jörgen Kock in the 1530's. There is a statue of King Karl X Gustav and a fountain that represents the reservoir that used to provide water for the buildings in the 16th century. Stortorget is surrounded by a number of interesting buildings.
When Stortorget wasn't big enough for Malmö's trade, another square was built in 1590 - Lilla Torg. A market hall stood there until 1968 but today the square looks like it did originally, with cobblestones and surrounded by old houses. There are many restaurants and cafes in Lilla Torg and in the summer it is a very popular meeting place and functions as one big outdoor café.

This can be found in Stortorget and was originally built in 1546, but it has been altered several times since. The facade got its today's appearance - in Dutch Renaissance style - in 1864-69.

One of the oldest buildings in Malmö, the church was constructed at the beginning of the 14th century in brick Gothic style, modelled on the church of St. Mary in Lübeck, Germany. It has been remodelled several times, most recently in the 1890's.

The City museum is housed in the Malmöhus Castle, which was built in the 15th century and is one of the oldest remaining Renaissance castles in Scandinavia. Here you will find collections of art, folklore and natural history. Across the street there is the Science & Technology/Maritime Museum. There is a small, traditioanl fish market nearby - Fiskehoddorna.

The Western Harbour is a new - and very chic - district of Malmö, situated by the sea, and built on the former port and industrial land. Here you will find the Turning Torso, a 190 metres high tower which twists through 90 degress, designed by Santiago Calatrava, and which is both an art installation and an apartment block. As well as a row of lovely restaurants with great views over the waterfront, there are parks and recreation areas, a skate park (in Stappelbäddsparken) and of course a view of the superb sunsets over the Øresund Bridge.

'City of Parks' and beaches

Malmö has 16 parks, three in the centre of the city - Slottsparken (The Castle Park), Kungsparken (The King´s Park) and Pildammarna (The Willow Ponds) - and five popular bathing places, all located along the coast of Öresund. Three are sandy and the other two have spacious wooden decks. Common to all of them is that the water quality is so good, that they can display Blue Flag. The ones nearest to the city centre are Ribersborg (called locally 'Ribban'), a 3 km long sandy beach with an open-air bath house, Ribersborgs Kallbadhus, built in 1989, lying 300m offshore, and Scaniabadet and Sundspromenaden in Västra Hamnen with wooden decks and piers.