A History of Mowing - as reflected by Ransomes Jacobsen

2017 sees a major milestone in the grounds care industry with Ransomes Jacobsen celebrating its 185th anniversary of mower production at Ipswich. 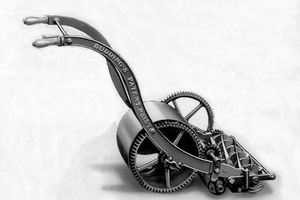 Edwin Budding’s historic lawnmower design was patented in 1830, and JR & A Ransome was the first company to obtain a licence to manufacture this remarkable invention. The first Ransomes-manufactured machine for domestic use was produced in 1832, and this signalled the beginning of commercial mower production in the UK.

Although the company no longer produces domestic lawnmowers they are one of the leading commercial mower manufacturers supplying equipment to golf courses, local authorities, landscape contractors, sports clubs and major sports stadia around the globe.

Alan Prickett, Managing Director of Ransomes Jacobsen commented, "This is a hugely significant milestone in the history of our company; from this small beginning, we are now one of the leading grounds care machinery manufacturers in the world. Ransomes mowers have been supplied to monarchies and nobilities across Europe and Asia, and the Ransomes name has become a by-word for quality British engineering. Through the years, the company has had its ups and downs, but today it is a vibrant company with a modern manufacturing plant providing employment and career opportunities to the people of Ipswich.

"If you look at the grounds care manufacturing industry today, you’ll find a huge number of people who either began their careers in Ipswich or have worked for the company, and this has been the case for decades. On a personal basis, I am delighted to be heading a dynamic management team at this significant moment in the company’s history and thank everyone, past and present, for their contribution." 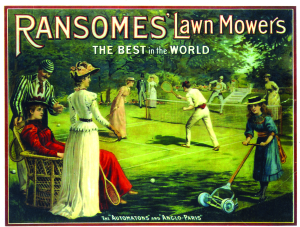 Production of the Ransomes Budding begins in Ipswich in 1832. Innovations quickly follow, and by 1852 some 1,500 improved versions of the 21-inch mower had been produced. In 1870 the range was extended with the introduction of horse drawn mowers.

Shortly after the dawn of the 20th century, Ransomes engineers produced the world’s first petrol driven lawn mower. This single innovation in 1902 was to change the way that grass was cut for ever. 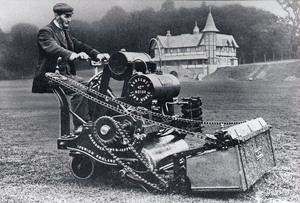 In 1902 we were the first company to power a ride-on mower using a petrol engine; one of the first was sold to Cadburys to maintain their Bournville sports ground.

By the end of the 1920s, the Ransomes catalogue featured Quintuple and Septuple gang mowers, using cutting cylinders from horse-drawn triple mowers ganged into combinations of five and seven units.

The new White City works in West London opened in 1937 to meet the growing demand for Ransomes mowers.

In the late 1930s greenkeepers began to overcome their reluctance to use petrol-driven machines, and this was as a result of the introduction of the Overgreen, a machine featuring a power unit with large pneumatic tyres that pulled three Certes cutting units and enabled a single greenkeeper to cut 18 greens in a day.

After World War II a number of new machines were introduced, including the Auto Certes, a mower that developed a worldwide reputation for its exceptionally fine cut. 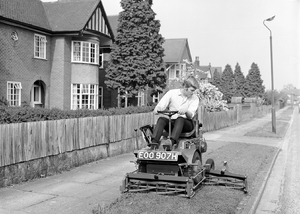 1964 saw the introduction of the Ransomes Quint, the world’s first tractor-mounted, power-driven five-unit gang mower. In the same year, the Motor Triple was launched- a highly manoeuvrable, high output mower which elevated Ransomes to the forefront of the European professional turf care market.

In 1978 Ransomes acquired an interest in an American rotary mower manufacturer, which subsequently became a wholly owned subsidiary, Ransomes Inc. The result of this fruitful union was the Motor 180, with power units manufactured in the USA and cutting units built in Ipswich.

The Motor 213, a hydraulically driven triple reel mower for the local authority market was launched in 1982. This high work rate, ride-on triplex mower heralded the change from large-scale pedestrian-operated mowing practices to more productive and cost-effective maintenance of roadside verges and housing areas.

1988 and Ransomes acquires Cushman Ryan, the U.S. manufacturer, which provided access to the Cushman Turf Truckster and its wide range of accessories for topdressing, spraying, aeration and other maintenance duties on sports turf areas.

Company re-branded in 2001 as Ransomes Jacobsen Ltd, focusing on core brands: Ransomes for local authority and municipal mowers, Jacobsen for the golf sector.

In 2016, Jacobsen signs a contract to become the “Official Machinery Supplier of the Ryder Cup 2018.”

For more information go to www.ransomesjacobsen.com