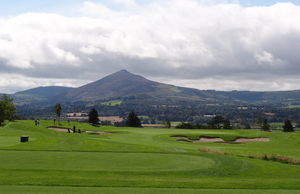 The project involved the relocation of Dun Laoghaire Golf Club to a new site financed by a developer who planned to re-develop their existing site. Predominately due to safety concerns, the existing Harry Colt courses future was uncertain so, following several presentations to the membership, relocation to a new 27 hole golf course with the highest possible specification was agreed.

The project was complex due to strict environmental considerations as the site bordered a Natural Heritage Area. This affected options for drainage requiring the capacity to attenuate 100 year storms. The drainage programme had to use wetland technology, archaeological relics had to be protected and rain water harvesting was required as the irrigation water source. The clubs brief was to move into a golf course with a very early sense of maturity which was challenging since the most of the site was treeless with limited topographical interest.

Solving these problems required extensive earthworks, wall-to-wall irrigation, intensive drainage and robust landscaping. The civil element of the design including flood attenuation, drainage, buggy paths, wetlands, large lakes and aeration was also complex. A further challenge was caused by the glut of consultants representing the club and the developer, requiring my careful management.

My involvement spanned all aspects of the project lasting more than three years of continuous activity and to this day I still consult for the Club as the golf course continues to evolve.

Dun Laoghaire was voted the number 1 parkland course in Ireland 2012 and 2014 and also hosted the 2016 Curtis Cup.