In the Top 20 courses from last year’s Golf World ranking of the “Top 100 Courses in Britain and Ireland”, which architects do you think were credited most? No prizes for guessing Old Tom Morris first and Harry Colt second but who was third? George Lowe. 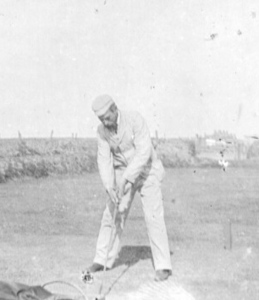 Golf history has not been as kind to Lowe as it has been to Morris and Colt and yet his influence on many aspects of golf’s development, including golf course architecture, has been profound. Apprentice to Old Tom Morris, original designer of Royal Lytham, Royal Birkdale and numerous other courses on the coast and inland, innovative and successful club-maker, teacher and associate of Harry Vardon, George Lowe was a key agent of change in the transformation of golf into a global industry. The focus of this article is George Lowe’s golf course design work in England.

Firstly, some clarification: we’re not talking about the George Low Sr. born in Carnoustie in 1874, who moved to the US, was runner-up in the 1899 US Open, pro at Baltusrol and golf course architect. Nor the latter’s son, the acclaimed putter George Low Jr. Nor the George Lowe Jr. of Barwon Heads and Warrnambool fame in Australia (that’s our man’s son).

Our man is George Lowe born in 1856 near Carnoustie, one of the classic Scottish pro-greenkeeper-teacher-clubmakers of the late 1800s/early 1900s, who, to use Bernard Darwin’s 1952 phrase, “dared the great southern adventure” in England and Australia. Lowe’s entry in Nisbet’s Golf Year Book 1907 states that he was: “Engaged as professional to the Old Links G.C., St Anne's-on-Sea. Served apprenticeship at Carnoustie, Leven and St Andrews. Was 12 years at Hoylake and nearly 17 years with Lytham and St Anne's G.C.”

After his first wife’s death, he moved to Australia in 1920, where two of his sons were already golf professionals. He became pro at Queenscliff GC, Victoria in 1921. Although he resigned in 1922, he advised on course changes and left a lasting impact, commemorated in a plaque unveiled in 2007. He died in Australia in 1934.

Research for this article has identified 41 courses designed by Lowe between 1888 and 1911. And yet Nisbet’s Golf Year Book stated in 1907 that he had “laid out nearly 100 courses’. In 1911, the Manchester Golfer reported that he “seems to have been called in to all of Manchester’s golf courses at one time or another.” His Obituary in 1934 credits him with “having designed more than 120 courses in England, and on the Continent of Europe”. Where are the missing 80?

The known 41 Lowe designs are concentrated in the North-West of England, focused on Lancashire, spreading north to Cumbria and the Isle of Man, east to Yorkshire and south to Cheshire and Derbyshire. The contrast with contemporaries, such as Willie Park Jr. who spread themselves successfully across the UK, the Continent and North America, is clear.

Perhaps Lowe had no need to travel? His 29 years of employment at Hoylake and Lytham from 1877 - 1905 coincided with the first great boom in British golf. The North-West of England, a region then of immense industrial growth and social change, was at the heart of the golf boom. Royal Liverpool, the first new course to be built in England near a large and growing centre of population, gave the young Lowe his entry into golf course design, working alongside Hoylake’s Head Pro, Jack Morris, Old Tom’s nephew. Lytham placed Lowe firmly in the spotlight. Like Donald Ross at Pinehurst some years later, Lowe had no need to go searching for new clients. At Lytham, he was designer, professional, club-maker and Custodian of the Links at one of Britain’s most high profile new courses located in one of Victorian England’s most popular holiday regions. From his Lytham base, Lowe went on to build a portfolio of golf course designs including some of the great names then and now in British golf: Lytham and Birkdale (before they became Royals), Hesketh, S&A, St Anne’s Old Links and Seascale.

Yet his current profile in Britain seems higher as a club-maker than it is as a course designer (Nisbet’s noted his speciality “iron-faced clubs, especially niblicks”). He patented a matched set of irons in Britain and the US in the 1890s and, according to his Obituary, made over 25,000 clubs.

Why is he better known for his club-making than his course design? Partly, it’s the impact of the inevitable march of time on his courses. Much of his design work was done before the introduction of the Haskell ball, let alone the titanium face. Roads, housing, safety concerns: many factors have gnawed away at his work over the years. Some critical golf literature also played its part, portraying the pro-greenkeepers of Lowe’s era as fortunate to be given the best natural linksland sites and unable to succeed on more demanding inland sites. Lowe was at his peak in what Tom Simpson termed the “Dark Ages” of British golf design. Alister MacKenzie was another vociferous Golden Age critic generally of Lowe’s era and specifically of Lowe’s work at Lytham.

Others however, have commented on the excessive simplicity and inaccuracy of the Dark Age label. For me, Lowe’s work confirms the inadequacy of the Dark Age description. It’s true that the most prominent names in Lowe’s portfolio are links, rather than inland courses and some do contain penal hazards and blind shots. Bernard Darwin in 1910 described the then natural crater greens at Lytham as “rather a feature of the course”. In defence of Lowe and his contemporaries, Charles Alison (1920) described how the architect in the late 1800s “was forced to place all his putting-greens in positions where strong turf could be obtained, and as such positions were almost invariably hollows, the pot green and the blind approach resulted”.

There is also clear evidence from a range of golf club centenary books that Lowe did design many courses on the spot. The Halifax GC centenary book notes that in 1895 Lowe “had played round (Cliffe Hill) park and marked out a ... golf course”. The Preston GC centenary book On Fulwood Green states that Lowe laid out nine holes in the week preceding the Club’s opening. Not all his golf design work, however, was done in day trips. At his then home club in the mid-1890s, Lytham and St. Anne’s, Nickson (1999) records how Lowe supervised the eight man construction team for three and a half years on the construction of the new links on what remains the current site. Lowe even paid the construction crew their weekly wages and only billed the club every six months.

Lytham is central to Lowe’s story and one of his key golf design credits. The current club website states that: “The layout of Royal Lytham & St Anne’s has remained faithful to the original created by the club’s first professional, George Lowe, over a century ago”. During construction of its new links, the Club was operating on another course, so Lowe did not face what was for him the usual time pressure to deliver a functioning course quickly. Taking his time, Lowe delivered a well-received course, confirming that the early pros were capable of great designs when able to remain at one club for an extended period. According to Nickson, “The Club prospered on its new site”. Arthur Croome noted in 1901, that “the greens were absolutely perfect”.

The severity of the bunkering is a distinguishing feature of Royal Lytham - how much is this due to Lowe? Many changes have been carried out since Lowe left Lytham in 1905, in particular by Colt between 1919-23, in advance of Lytham’s first Open in 1926. But it seems Lowe’s original bunker work at Lytham was not the simplistic, penal style typical of the Dark Ages. Harold Hutchinson wrote in 1903 that “the wisdom of a serpent is needed to avoid the hazards of the course”. According to Dr Steven Reid, Chairman of Heritage at Royal Lytham, eight greens are currently in their original positions as designed by Lowe (1st (probably), 2nd, 7th, 13th – 16th & 18th, although the 7th will change next winter). 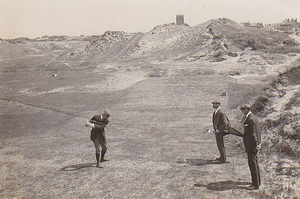 Hesketh's fourteenth at the turn of the 19th century

Elsewhere on the West Lancs coast, the position of ten holes at S&A remains Lowe’s work, according to Club Historian Vernon Cubbon, including the 16th (Gumbleys), which the S&A website describes as “the feature hole on the course”. The Hesketh Club Historian, Dr Harry Foster, states that the current 5th, 6th, 14th, 15th and 16th holes are also Lowe originals. In Harry’s excellent book on the development of golf between Liverpool and Southport Links along the Line (2009, 2nd edition), he quotes Harold Hilton, who in 1910 wrote that the 14th (now 15th) at Hesketh: “has been eulogised by many as the best in the north of England, while some go further and term it the finest they have ever played in their lives and it is worthy of such praise”. Two of the most popular and memorable holes on the West Lancs coast (both with blind shots) are Lowe originals. 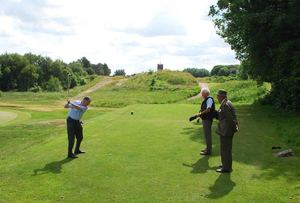 
Royal Birkdale is the other Top 20 course credited by Golf World to George Lowe. Flat fairways threaded through the sandhills are a feature of Birkdale. Photos taken before Hawtree and Taylor’s 1931 revisions confirm that Lowe routed the course in the valleys between the sandhills. Harry Foster (2009) notes that: “Birkdale’s drainage problems, which stemmed from having used low-lying “slacks” for fairways, were not completely remedied. (In 1911) ... there was a move at the Annual General Meeting to have the subscription reduced because of the waterlogged nature of the course”. All of the tees and greens may have been moved over the years and the drainage problems resolved but, for Mike Gilyeat, Birkdale’s Managing Secretary, the current course incorporates a lot of Lowe’s original routing.

Looking at numerous Lowe routings now, his preference for slice-side hazards is clear. Like his contemporaries, he placed greens and tees far closer to site boundaries than most safety-conscious architects would dare today. Many tangible Lowe features (greens, tees and bunkers) may have long since disappeared but the essence of his slice-side routings remains at many courses today and crucially influences that most intangible of all features, course 'character'.

Lowe’s contribution to inland golf in Britain is also perhaps understated. Many of his inland courses have passed their centenary and Harry Colt’s test (“Is it going to live?”). One that did not due to lease problems, Trafford Park, was the only inland course in Cheshire and Lancashire reviewed by Darwin in his 1910 book. He describes Lowe’s work there as “good turf, good greens, good length holes”. Lowe was also probably one of the first designers to take golf successfully and sustainably into the English moorlands and uplands (e.g. Bakewell and Saddleworth).

One of Lowe’s other inland designs, Studley Royal in North Yorks, led to a significant Lowe contribution to the global golf industry. Here he obtained for Harry Vardon, golf’s first international celebrity, his first post in England as pro-greenkeeper in 1890, having earlier the same year taken on Harry’s younger brother Tom at Lytham. Intriguingly, the Colne GC Centenary book states that George Lowe “was very good friends with Harry Vardon and they often played golf together and it has been said that courses designed by Vardon had much input from Lowe”. Are some of Lowe’s missing courses actually those with Vardon’s name on?

Overall, I think there’s enough evidence to defend George Lowe from the excessive Dark Age criticisms. Time and the breadth of his contributions to the game should not allow us to forget the quality and importance of George Lowe’s golf course designs. We need to find out more about and celebrate more the pro-greenkeeper-designers like George Lowe. They were key catalysts in the transformation of a Scottish pastime into a global industry.