by Ken Moodie, MEIGCA & Past President of the European Institute of Golf Course Architects

It is hard to believe that Glen Abbey Golf Club, which hosted the Canadian Open for a historic 30th time last weekend, was under threat of closure less than a year ago. At that time, the owners ClubLink, had a live application for a planning permit to replace the course with around 3000 housing units, shops and offices. This would have destroyed the first solo design by Jack Nicklaus when he began his golf design empire in the mid 1970's, and one of the first purpose-built 'stadium' courses designed to thrill spectators with do-or-die golf holes and give them a great viewing experience. Fortunately, the Town of Oakville, where the course is located in the Toronto suburbs, thought the course and the old estate might have some heritage value and commissioned a study, led by Letourneau Heritage Consulting, to investigate this. 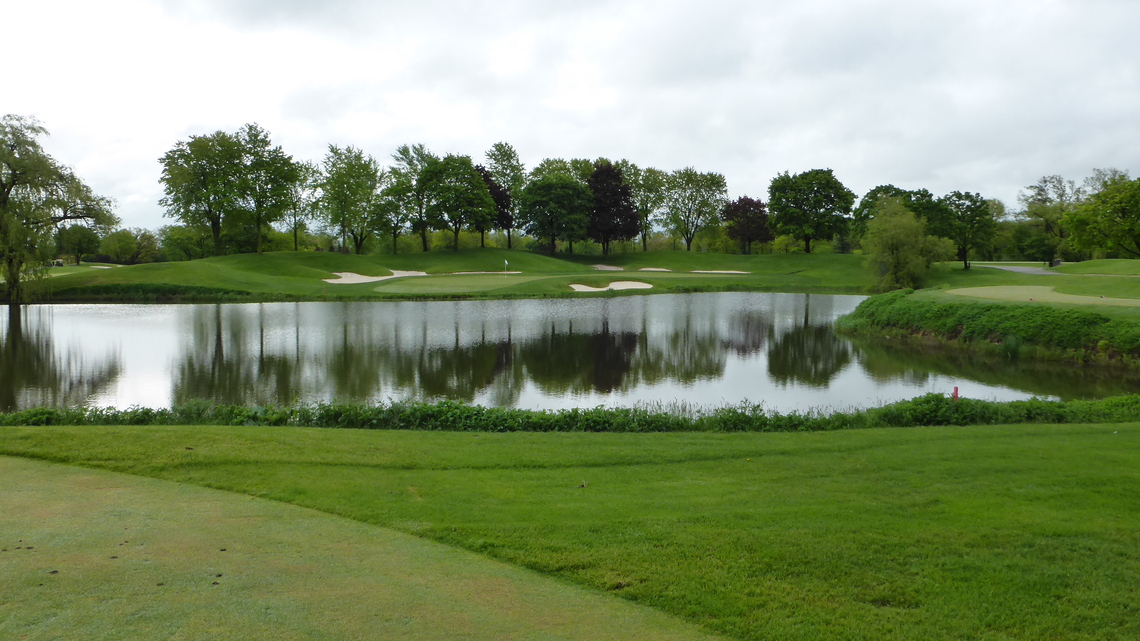 The par 3, 3rd hole (7th in tournament play), inspired by the 12th at Augusta

Ken Moodie, EIGCA Member and Past President, was appointed as the golf course architectural consultant since he had led a study for English Heritage (now Historic England) for the European Institute of Golf Course Architects which resulted in a report on 'Golf Courses as Designed Landscapes of Historic Interest'. This report looked at how golf courses could be given statutory protection when under threat from development, in the same way that a historic building or park might be during the planning process. He made his first visit to Glen Abbey in early January 2017 and took part in a meeting he describes as like being part of the TV show 'Time Team' in which all of the heritage consultants reviewed the history of the site from the earliest settlers, its time as an estate for a wealthy mining magnate, to its modern-day use as a golf club. Once its heritage value as a golf course had been confirmed, Ken was then asked to conduct a more detailed Heritage Review which culminated in a report in August 2017 and the designation of the site last year as a Cultural Heritage Landscape, saving the Nicklaus course from destruction. 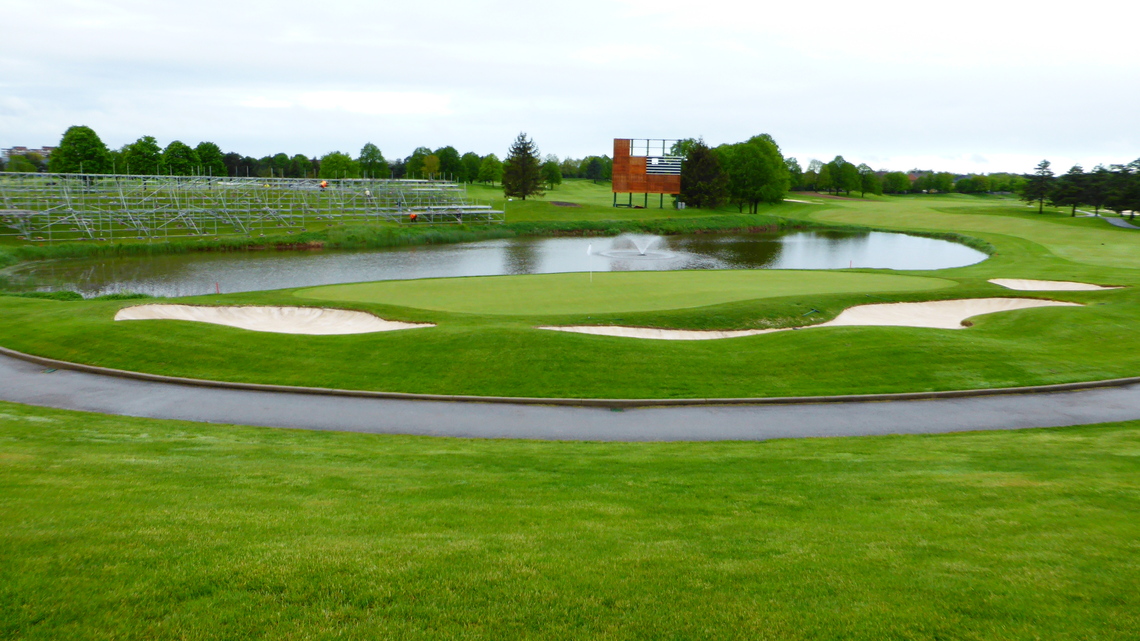 View from banks at back of 18th green

View of 18th green from clubhouse

The golf course at Glen Abbey was designed in 1974/75 by Jack Nicklaus and his team which included Bob Cupp, who would later go on to become a well-known golf course architect in his own right. The design of the course was inspired by August National, where Nicklaus had already played on 15 occasions, and winning the tournament 4 times, by the time he was starting work on the Glen Abbey project.

The masterplan for the course was designed with a number of features which were either unique or rare at the time and included:

Glen Abbey is also the site of the Canadian Golf Museum, headquarters of the Royal Canadian Golf Association and has witnessed many famous golfing events. Most notable of these was the incredible 200 yard bunker shot, over water to a flag on the right of the green, which Tiger Woods played with a 6 iron on the par 5, final hole, to win the Canadian Open in 2000. This has gone down in golfing folklore as one of the finest shots ever played in a televised tournament and it is often attempted by golfers that come to play at Glen Abbey. Tiger's shot can be viewed online here

Jack Nicklaus summed up his design concept for Glen Abbey, in an interview in 1975, as follows:

"nowhere else in the world will you find a course so adapted to tournament play that 10 of the 18 holes may be clearly seen by spectators within the area of a football field - 10 holes plus bits of several others. But what pleases me more than those features is the concept of play that I have long wanted to express in a course … Glen Abbey expresses my belief that golf is basically a game of precision, not power. It places stress on strategic rather than punitive design. The average player may find [Glen Abbey] a bit more difficult than he likes, but the low-handicapper will soon realize that brains, guile and courage will produce lower scores than muscles. I designed it in line with my belief that every hole calls for one very good shot to score par, and a great shot to score a birdie. The greens are small (they average 5000 square feet) because I believe large greens detract from the finesses demanded in chips, pitches and sand shots." 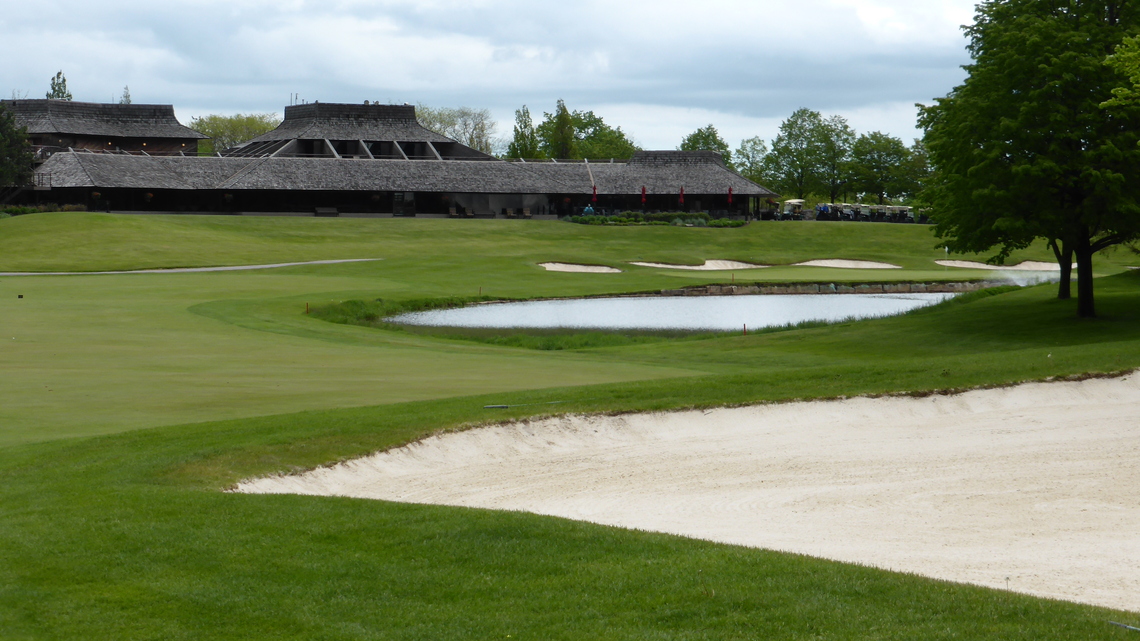 If you enjoyed watching the Canadian Open last weekend, imagine what a great pity it would have been if the course at Glen Abbey had been lost forever. No longer would golfers from around the world be able to walk the holes that have become famous as a result of 30 Canadian Opens, or have the chance to try to emulate the famous Tiger Woods' shot from the bunker on the 18th hole. What if the Old Course at St Andrews or August National came under a similar threat? Surely, the finest and most historically important golf courses of this world deserve some level of protection? It is good to see that Canada treasures its heritage and has the mechanism in place to protect its most important golfing landscapes.