Great work happens when EIGCA members work with EIGCA partners and affiliates, with Golfclub Breitenloo an excellent example of how these relationships work successfully in practice. 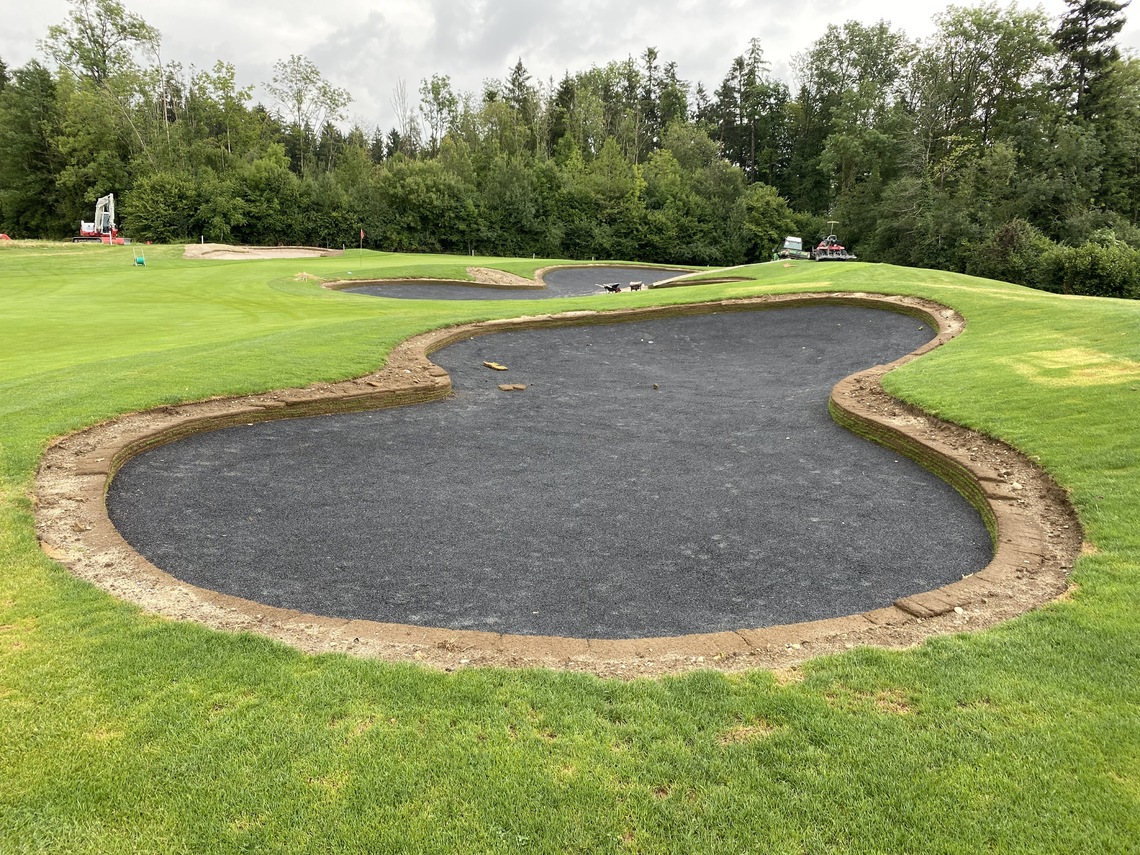 Two concurrent projects over this summer and autumn - bunker renewals and an upgraded irrigation system – were both completed three weeks ahead of schedule for a delighted client.

Christoph Städler MEIGCA of Städler Golf Courses was contracted to redesign all 41 bunkers on the course. Erosion caused by heavy rain and inflowing surface water contaminated the bunker sand with clay particles and stones. Christoph’s solution was to remodel with a counter-slope to the surrounding areas and protect with the “Blinder” bunker liner. This elastic, 5 cm thick layer was chosen because the porous rubber granulate is water permeable and also prevents contamination of the sand and penetration of stones from the bottom in case of frost. 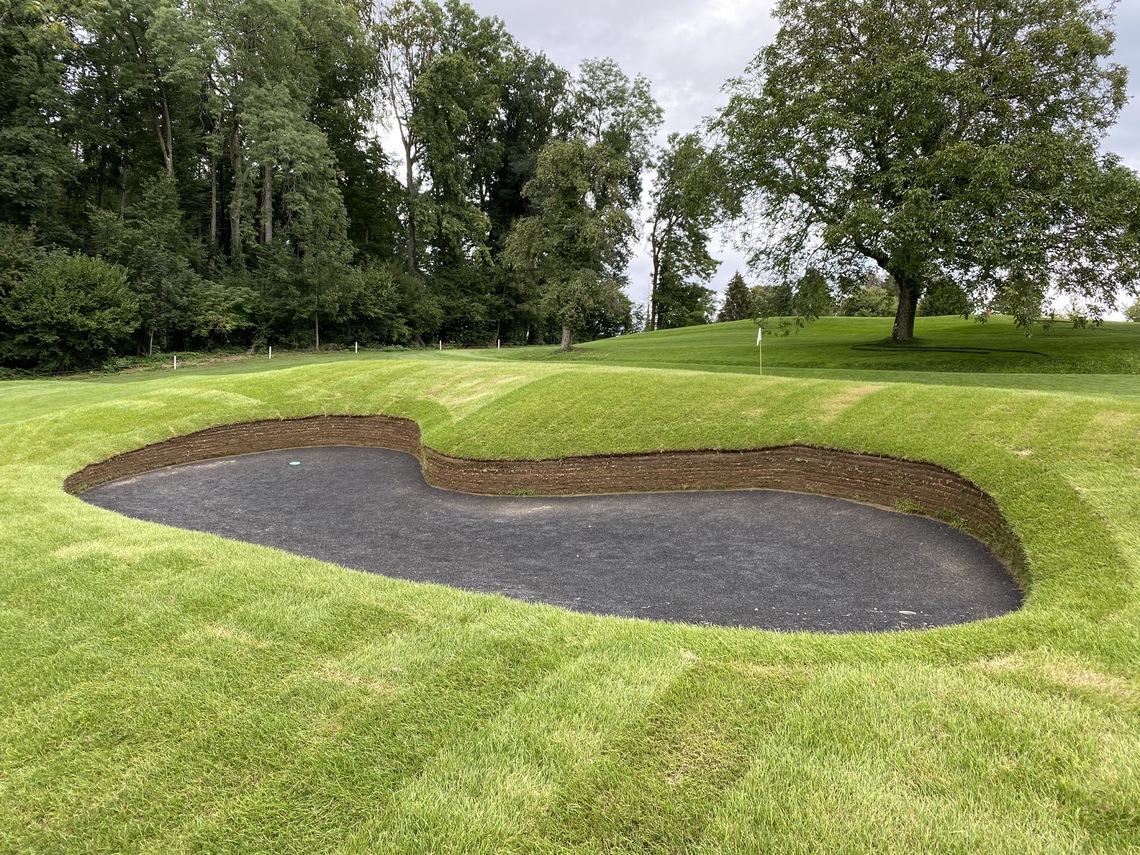 To take advantage of the optimum summer weather conditions and cause as little damage as possible to the existing golf course, construction commenced in mid-July. Less than three months later – and three weeks ahead of the contracted schedule – all 41 bunkers and their surrounding areas had been remodelled and sealed with Blinder. The new bunker edges, which were provided with several layers of revetted sods, give the bunkers a striking, visually very appealing look that impresses and delights the club members. Thanks to the covering of all treated surrounding areas with sods, the golf course was playable again just a few days after the acceptance of the construction work, without any traces of the previous construction work being noticeable. 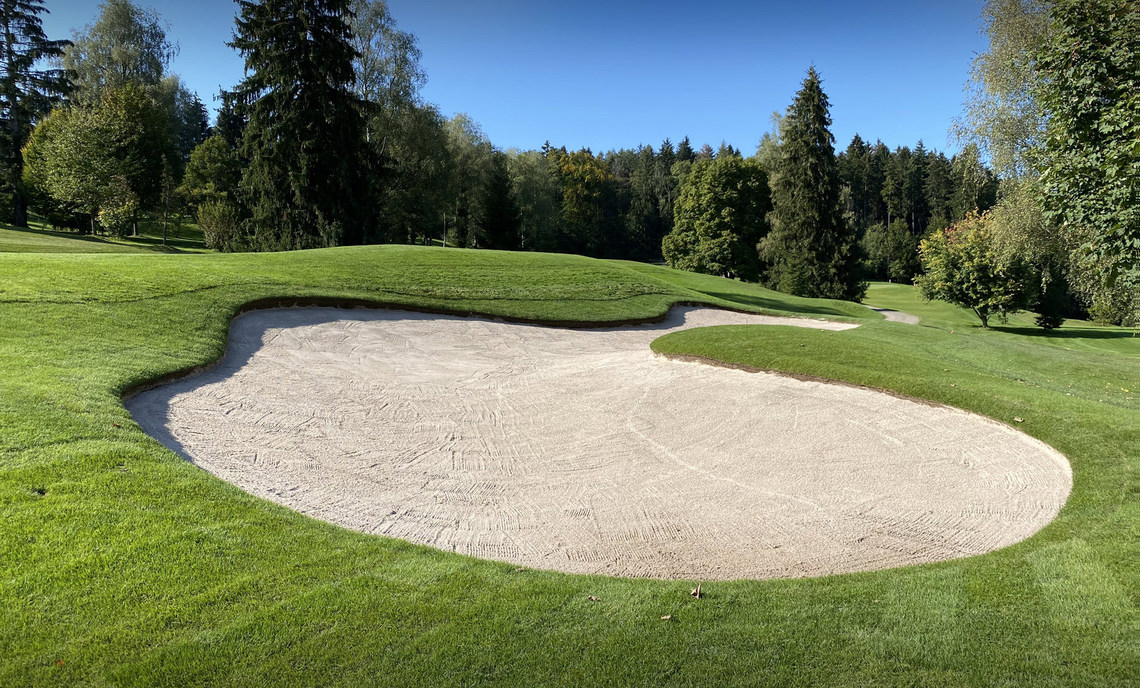 A Rain Bird irrigation system was already installed at Golfclub Breitenloo. When the system was due an upgrade, the Club chose to stay with the proven quality of Rain Bird products, including the market-leading 752-series rotors and IC control.

The improved irrigation system consists of:

Fairway Irrigation: the existing single-row fairway irrigation system was supplemented with two additional rows of sprinklers along the outer fairway edges to prevent scallop-shaped drying of the fairways at both edges. The new triple-row sprinkler system achieves a homogeneous water distribution which increases the density and health of the turf and results in a high-quality, uniform appearance of the fairways.

Green surrounds: back-to-back sprinklers were installed on the greens alongside the existing greens sprinklers for the healthy maintenance of the turf on the surrounding areas. The greenside bunkers are also covered by the surrounds sprinklers to keep the bunker sand moist, thus improving the quality of play and significantly reducing the risk of "fried-egg lies".

Turfpath irrigation: the grass paths along the tees up to the beginnings of the fairways were each equipped with a row of small special sprinklers to ensure optimal regeneration of the grass on these extremely stressed paths.

Städler Golf Courses subcontracted the planning of the irrigation system to EIGCA Affiliate Giles Wardle of Irriplan. Ocmis was commissioned to install the irrigation equipment, which was completed in less than three months. This demanding, extensive installation was also completed three weeks ahead of the contracted schedule, which is even more impressive considering the Covid-19 restrictions in place, which greatly increased the logistical requirements.