The Dr MacKenzie research team is very pleased to announce that they have completed the 16th Revision of the MacKenzie Chronology, after many, many hours of research and contributions by a number of people. This Revision is considerably advanced over the 15th, with over 400 new entries and a number of previous entries modified or expanded. This revision contains a good deal of timeline information regarding MacKenzie's early years, about his family, as well as his education and WW1 service. 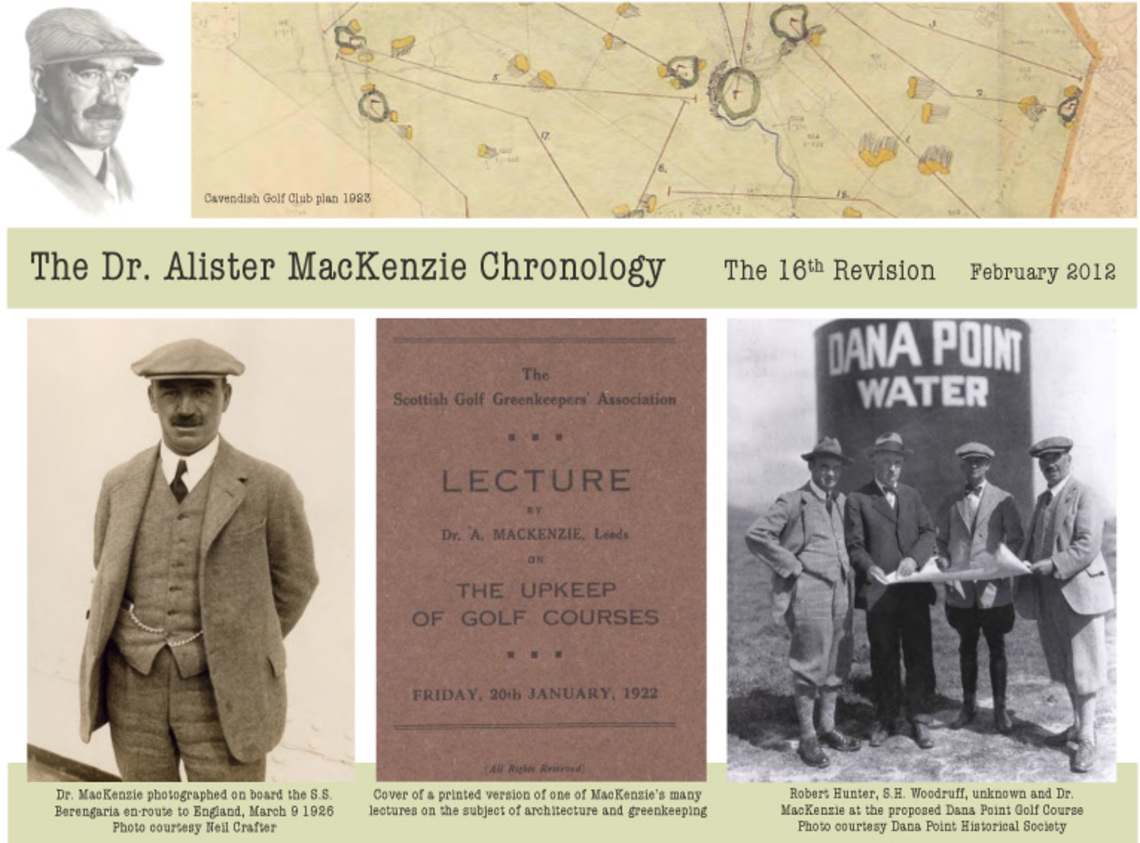 "Through the particular efforts of Niall Carlton in Scotland we have delved into the British golf magazines of 'Golf Illustrated' and 'Golfing' unearthing much about MacKenzie along the way, including many of his writings and also his golf records at the Leeds Golf Club in the period of 1901 to 1903.

Sean Tully in San Francisco and Bob Beck in Santa Cruz have been most diligent in researching MacKenzie's time in the USA, and Bob has unearthed records from Cypress Point that show when Mackenzie stayed overnight in the clubhouse and even what he ate for his meals! It is staggering that 80 or more years on we can get down to this level of detail about the life of Alister MacKenzie.

Another delightful gem was the discovery that the renowned golf writer Bernard Darwin went up to Leeds in late February 1922 and stayed for three days with MacKenzie at his home Moor Allerton Lodge. MacKenzie drove Darwin around to show off a selection of his courses and they visited Alwoodley, Moortown, Ilkley, Pannal, Starbeck and Oakdale, playing at some of the courses along the way and looking at others. Darwin wrote about his experiences in Leeds with MacKenzie in two of his columns in 'Country Life' the following month.

Accordingly, we believe the wait since the 15th Revision was released back in August 2010 has been well worth it, and trust that you will agree when you peruse this substantial document.

Thanks must go to Nick Leefe, the Secretary of the Alister MacKenzie Society of Great Britain for his encouragement and contribution, and to Sean Tully, the golf course superintendent of the Meadow Club and early Californian golf researcher extraordinaire, who contributed significantly to the 16th Edition before handing over the reins to me late last year.

Also thanks to Mark Rowlinson, Mark Bourgeois and Nick Norton of our research group, and to all the other historians and researchers around the world who contributed. The names of our many contributors are listed in the final page of the document."