The epic Bible of GOLF is perhaps one of the most unusual and unexpected delights, designed as much for the non-golfer as it is for the enthusiast. Every page of this unique illuminated tome is designed to be a treat on the eye, blending original art with poetry, rare and previously unseen photography with classic literature - and humorous illustration with satirical word craft.

This book has been donated to the Institute by the authors. They interviewed several members for the book and include quotations from them. It comprises eighteen chapters, to mirror the eighteen holes of a golf course. The artwork and photography are amazing and what makes this book one of the more esoteric and unique contributions to the storied literature of the game. It is published by Wonderland Publications - http://www.wonderlandpublications.com. 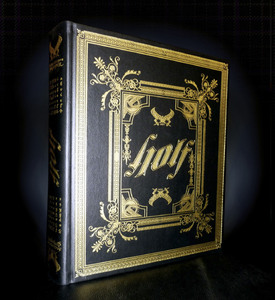 Foreword
The game, terrain and where it’s all heading. Resident professional and Ryder Cup winning captain, Colin Montgomerie looks at why hitting a stationary ball around hundreds of acres of land is so exhilarating, and yet so difficult, whilst reflecting on where the game stands as we head further into the 21st century.

(01) The Mistress that is Golf
The authors take a satirical look at the seduction of the game, investigating the infuriating, but often alluring temptation of golf.

(02) What’s so good about Golf?
Golf is a game that takes you on a journey of emotional highs and lows, and one of the first questions the authors asked the contributors was ‘what’s so good about golf?’ Colin Montgomerie explains the appeal as a lover of the game, along with the thoughts of the title’s many contributors.

(03) Daydreams & Nightmares
A look at Mary, Queen of Scots influence on the game, plus the rise of the pastime in Koen aan de Vecht, Holland, and later in France, through pursuits called Jeu de mail and Chole. The authors explore the even earlier influences from China, in the shape of Chuiwan, as well as a look at similar games introduced by the Egyptians, the Romans, and even Mongolian travellers.

(04) The Legends
Colin Montgomerie compares playing golf to playing chess, looking at Chaturanga, an ancient Indian version of the game, dating back to the Gupta Empire. Modern course design descends from the trenches of the Boer War and the authors look at the key chronology of those who delivered today’s modern golfing landscape. Much like Hollywood’s supreme, golf’s early design world had its own ‘Rat Pack’, dominated by a female socialite in the early 20th century. Mongolian travelers.

(05) The McCormack Effect
The authors look at the man who turned golf into a global sport in the 20th Century, Mark McCormack, and the rise of the IMG and TWI empire. How being knocked down as a child changed his life and set him on the path to dominate the game and become golf’s biggest media tycoon. A chapter featuring an exclusive interview with Todd McCormack, Mark’s son, as well as rare family archive images.

(06) We could be Heroes
Past player and commentating legend Peter Alliss lends his expertise to look at the way players take on the course. Award winning BAFTA screenwriter, Sam Snape explains how he sees the golf player as the main character in the story of a round of golf, slaying dragons and conquering demons. There is a look into ingredients and course design with Marco Pierre White (an ex caddie) and an exclusive section with Adidas biomechanics legend, JJ Rivet on how the human body works on the course.

(07) Pencil Lines to Planet Earth
A look at the further influences on design, such as taste, smell, sight, touch and sound, along with other visual and sensory perceptions derived from the worlds of art, music, literature, craft, addiction, obsession, and even sex. The authors investigate the cross over designs of Virgil Max “Ex” Exner, Sr, from buildings to cars, and how the course designer brings outside influences to the golf landscape. Jay Morrish, a top course designer, elaborates on the literary approach to golf course design, inspired by Edgar Allan Poe.

(08) 18 Lines to Glory
European Golf Design MD, Jeremy Slessor and Colin Montgomerie look at the course as a living landscape. The authors investigate how the routing of the 18 simple lines dictating the holes can influence the mood and behaviour of the player. They explore Alfred Watkins concept of Ley lines and the Nazca lines of the Chaco culture in South America.

(09) Threes, Fours & Fives
On every course around the world the game is broken down into 3, 4 and 5 par challenges. Leading course architects, David Kidd and Tom Doak explain how they design courses to keep the balance between short and long holes stimulating for the player, whilst Jeremy Slessor and European Institute Of Golf Course Architects President, David Krause, consider what ultimately makes a good 3, 4 and 5 par hole. Celtic Manor, Ryder Cup course designer, Ross McMurray takes us exclusively through his favourite 3, 4 and 5 par designs.

(10) The Land Navigators
It was Mary, Queen of Scots who first coined the term, ‘Caddie’, from using cadets to carry her clubs around a course, and the authors consider the unsung heroes of the golf terrain, the humble caddie, and the tenders of the land, the greenkeepers. European Tour Caddies Association Chairman, Richard Hallam looks at the role of the caddie and how to best read a course at eye level. Fellow caddie, Martin Rowley discusses how the modern caddie needs to be a psychologist, an advisor, a butler, a technician and a gofer.

(11) Avoiding Chapter Eleven
As the first decade of the 21st century came to an end the good times and the super course builds came to a shuddering halt. For the first time in living memory more courses were closing than opening. Peter Alliss talks about how many courses simply got too big for the regular club player during an era that saw courses get longer and more elaborate. Tom Doak and David Kidd give their views on the way in which resort course development imploded.

(12) Golf in the Backyard
A look at the emergence of smaller municipal courses, formerly known as pitch and putt, and the reintroduction of crazy golf, often derided by the industry, but a crucial part of bringing young people into the game. The authors explore how golf design needs to adapt to its environment and remain sustainable at all levels, in order for the local and global game to survive.

(13) Golf for all
A look at the multi cultural landscape of new players out on the driving ranges and practice greens, chomping at the bit to play more golf on real courses. This includes those limited to their homes, or just hitting a ball through the streets. Jeremy Slessor and Colin Montgomerie reflect on the impact of Tiger Woods and his influence on young players, and how the game is encouraging those with physical and mental disabilities to gain confidence.

(14) Twenty 20
The authors explore another sport that has embraced change over the last few decades. Cricket has often been thought of as the bastion of institution and exclusivity, but the truth is that for all its history, cricket is a game that is constantly evolving. Neil Robinson, the Research Officer of MCC exclusively discusses the changes in the game over the last half a century, including the emergence of the Twenty20 game format. The authors consider whether cricket can actually provide an essential blueprint to the growth of golf over the next few decades.

(15) Rediscovering the Spirit
Course designer, Line Mortensen considers the spirit of the game, whilst Todd McCormack speaks about his childhood, playing golf alongside his father at Prestwick. There is a look at what makes events like The Open and the Ryder Cup so special, investigating their roots and how in particular, the Ryder Cup became such a colourful carnival of golf, which essentially still harbours the true spirit of the game today, as recently endorsed by Colin Montgomerie. The authors look at how the game can recapture the spirit witnessed in so many photographs and memoirs from the early 20th century.

(16) The Golf Nirvana
A look at where the sport and the design of the game is heading in the future. How design can accommodate a broader spectrum of player, and the different ways in which it could be played, using different formats, as well as the use of land for people who just love the countryside and green spaces. The environment and the preservation of wildlife on courses are also put under the spotlight.

(17) Visions of the Future
The authors, assisted by some of the contributors take a wholly original and visual look at the ways in which the game could be remodelled in the future. Using everything from pencils, to state-of-the-art computer software, the publication creates visions of how the game could evolve, with one eye purely focused on imagination, and the other on sustainability.

(18) Planet Golf
A reflection on what the authors have learnt over the four years of the publication and their own views on where they see the game and its design going in the 21st century. Colin Montgomerie also gives his thoughts, as resident professional, as to how the game can continue to prosper and blossom, especially after the recent downturn.